A collector, wanting to showcase some of the spurs and badges in his collection in a book, approached High Noon Western Americana and asked them if they would be interested in taking on the project. Details were discussed, photos were taken and Ireland Graphic Design was approached to design and print the book.

When we first sat down with High Noon, we were presented with a very loose concept of the structure of the book, but not much else. There would be a full-page photo of each spur or badge and a caption when possible that would be divided into categories. The front half of the book would be spurs, the back half would be badges. The challenge was to find a way of presenting the badges and spurs in an interesting and eye catching way. Several ideas were tossed around, but it was finally decided that an additional page of supporting information or photos would be included prior to each badge or spur photo. 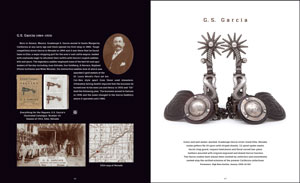 Playing off of the 50/50 aspect of the project, we went with a black and white color scheme. Every other page would have a black or white background. The spurs were photographed on white, the badges on black backgrounds and placed on the right side page. The left page would have the opposite background color and would contain information about the spur or badge. All supporting documentation, photos and maps would be converted to sepia tone.

Since one of the owners of High Noon is an authority on spurs, he began compiling historical information, photos and other documentation for each of the 50 spurs. He also included a few paragraphs of text about the spur maker, pattern, or spur itself. 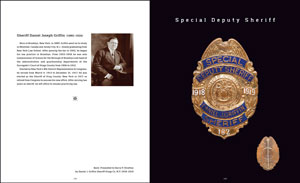 The badges presented a problem, however, since the collector had very little information available on them. Short of putting 50 stock photos of someone wearing a badge on the page opposite, we had to start getting creative. After looking through the badges we realized that many of them had individuals or locations named on them and others were specialty badges such as Registered Chauffeur, National Horse Thief Detective Association (NHTDA) and 1900 Census Taker. 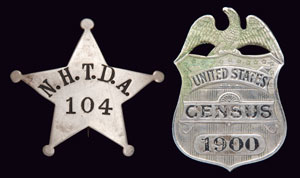 Working together with the other owner of High Noon, we began to research through old census records, the Library of Congress, various university libraries, historical societies and the Internet. We compiled information about the people, places, offices and locations, as well as, historical maps and photos for the majority of the badges.

Having compiled all of the photos, text and supporting information, the book finally came together. We were able to showcase the 50 spurs and 50 badges in an attractive way and provide historical information and photographs, helping to engage the reader’s attention.

Hard cover, large format book with dust jacket and special edition with leather cover with embossing and copper foil, including color photos of 50 badges and 50 spurs